I was using a different camera security application, mostly worked great, but it killed the performance of my computer. I just switched to Netcam and so far, pretty good. My question is around the library of motion recordings. In the other app, it would use a thumbnail of the actual frame that triggered the motion. It was a really good feature because when you are scrolling through a library of a camera pointing out doors, it was easy to figure out which were due to shadows moving or an animal in the backyard. Is this something configurable (ie; turn it on), or not supported?

Hi Tobin,
NCS use 50 frames before the trigger event and stores that together with the rest of the video. So it is about 2 seconds pre-trigger video. The thumbnail is the first frame which is just grabbed. If sorting out a thumbnail from the exact trigger point need some extra processing I am not sure. But, relying on just a thumbnail to decide if that recording is of interest or not seems a little bit to uncertain for me.

We have put a lof of effort into making Netcam Studio as efficient as possible to get a high FPS and a low CPU load. Happy that you value that!

Thank you the prompt response. As for the FPS and CPU, yes, looking great so far. As for the 50 frames and 2 seconds prior to the trigger, that is exactly my point, I’d rather have a thumbnail with the trigger like some of the other apps do. I get a lot of false positives, like shadows on the grass/yard from the tree’s during the day when the wind blows or at night when a moth flys in front of the camera at night.

I have a camera and a motion light under my deck pointing at my back yard. With the prior app if the motion light was triggered, the thumbnail would show the backyard lit up which really gets my attention when scrolling through thumbnails I may only look at thumbnails once or twice a week, that can be a crap load of thumbnails. After the initial thumbnail with the backyard lit up, there would be another thumbnail later with the light off (Ie: motion light turning off). If there was an animal in the backyard, heck even a person, I might even see that in a thumbnail. With the existing 2 second prior thumbnail, I have no idea if one of the 20 false positives is worth watching. I don’t want to watch every video across multiple days to see if something of interest happened, I’d rather skim the thumbnails and decide.

I have another camera in the basement pointing at a double French doors (all glass). There is also a motion light outside. Now, due to the way the house sits, periodically (several times each night and early morning), headlights hit the tree’s in the backyard which in turn causes motion to be detected. I can tell from thumbnails if that is the situation. If I see a frame with that area lit up, I know the motion light turned on, something more specific happened.

I’m not sure how to do an attachment, but I was going to show you a snapshot of my library for today. In two of the video’s I was letting the dogs out (one for out, one for in). In another video, I checked something on my lawn mower. A screen full of thumbnails, no idea from there which one is recording tree shadows moving or which is recording real events.

Sorry to belabor the point

Here is a screen shot, keep in mind this is not all of the video’s for the day, I just scrolled down to the time range that I know something was going on in the backyard. Here is the screen shot -> https://drive.google.com/file/d/0B0gtPWZzddG2QnRIVWJvRk5CTlk/view?usp=sharing

As you can see below, it tries to use the best frame when detecting something on the road: 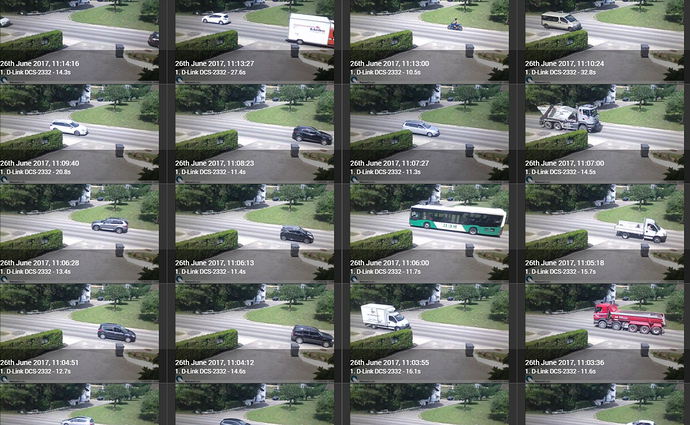 Try switching to blob detection with low / medium sensivity, it may help regarding all your false detections (due to area metering, the shadows and false positives are maybe considered as bigger changes as the real objects and therefore selected as thumbnails).